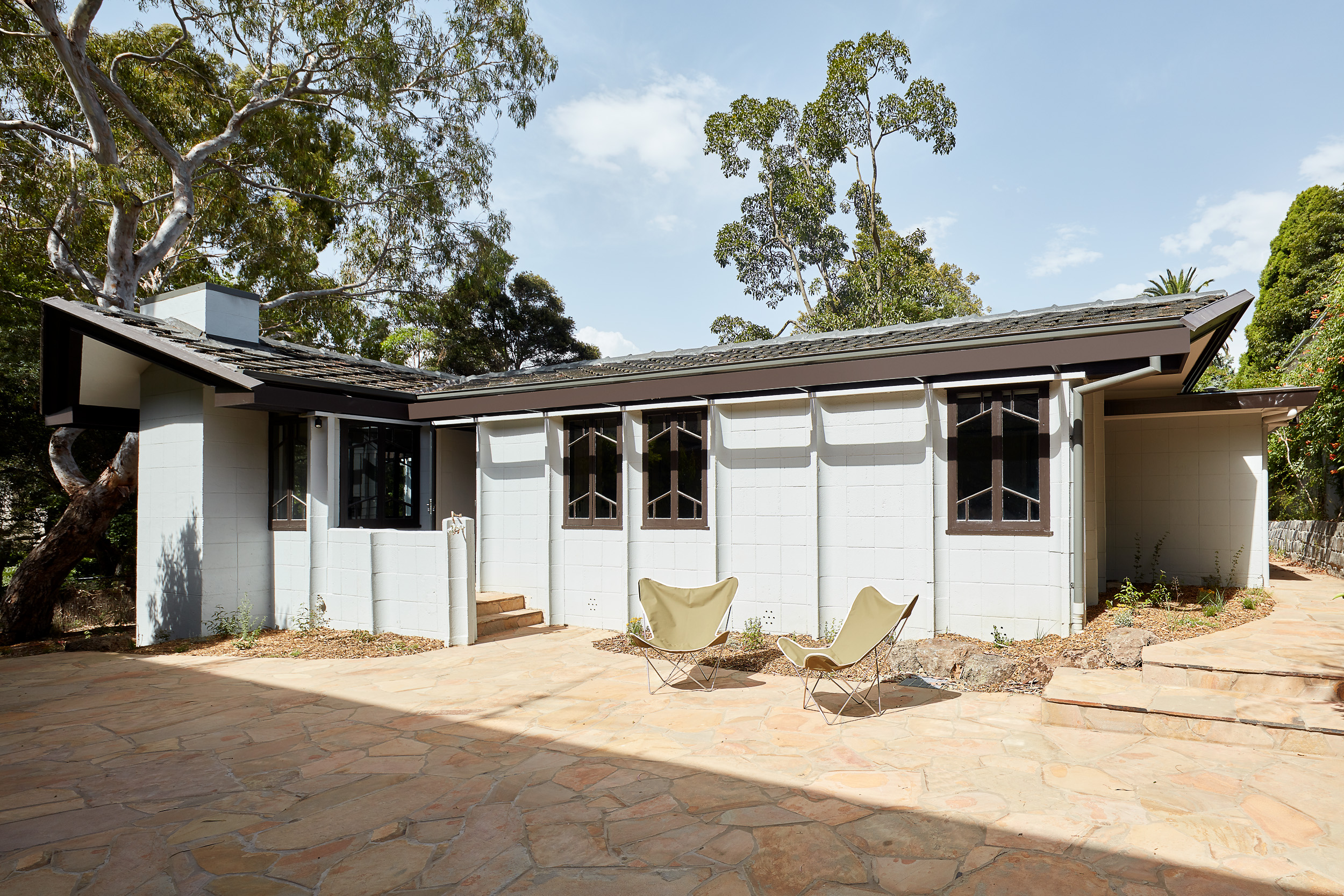 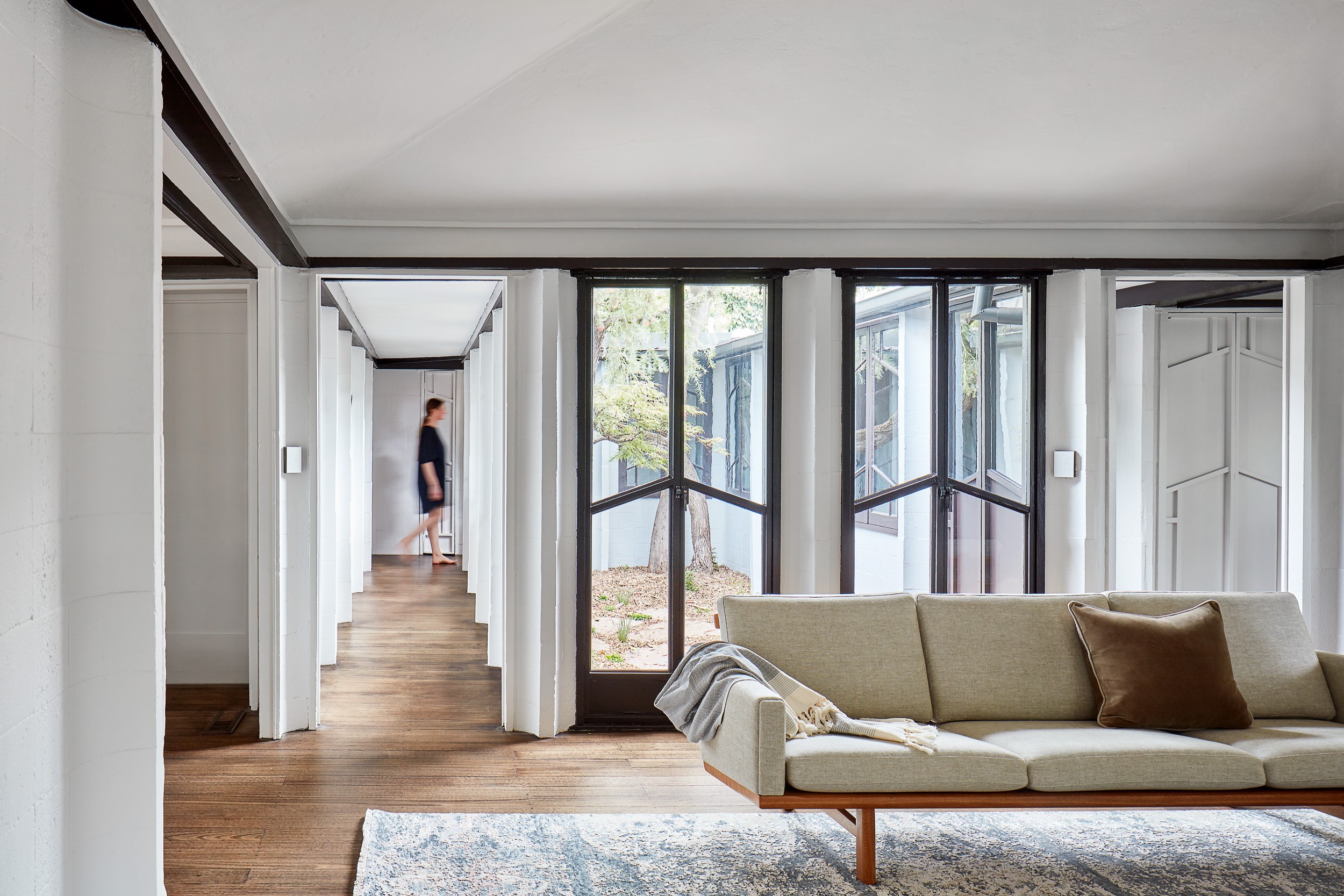 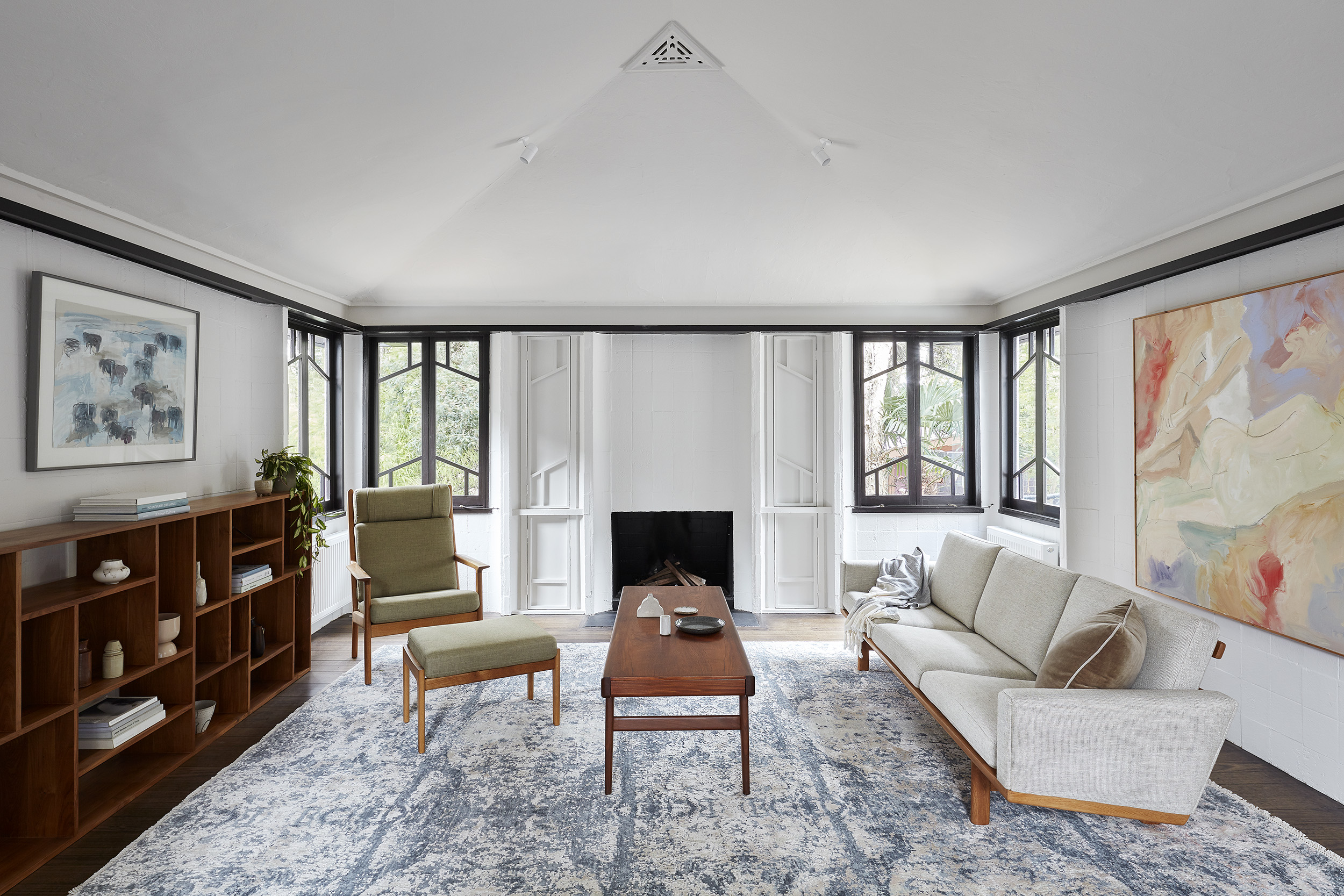 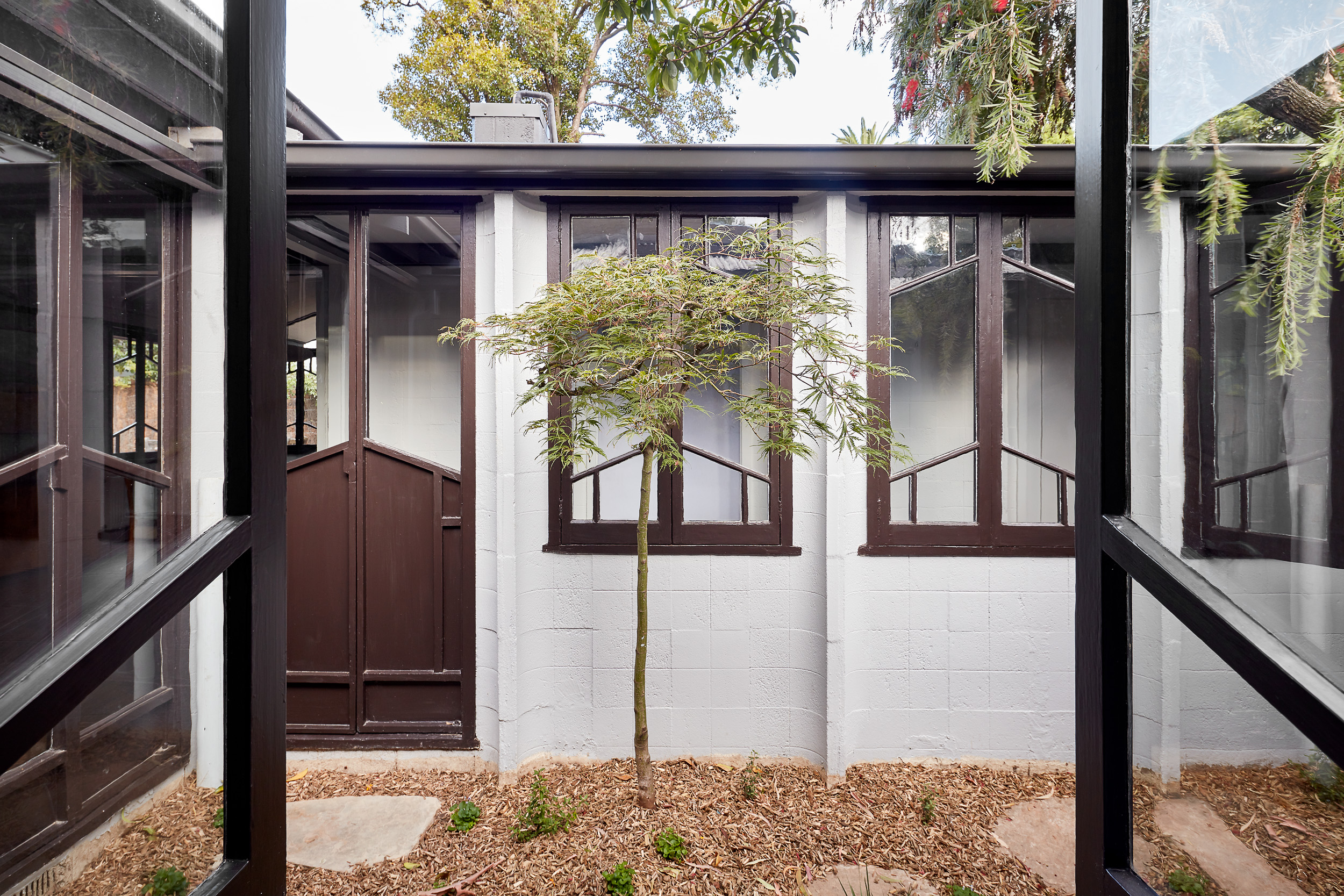 The most intact of the Knitlock houses and highly regarded for its contribution to Australian architectural history, the Former Salter House in Toorak has been carefully restored and repaired by its new owners. The work included updating bathroom and amenity spaces and integrating new technology and services.

Designed by Walter Burley Griffin and Marion Mahony Griffin in 1922 and built in 1926, the Salter House is the most well preserved Knitlock house in Victoria. It is also one of the earliest examples of a courtyard house in twentieth-century Australia.

Knitlock is an interlocking modular concrete construction system patented by Burley Griffin in 1917 as a means to build low-cost mass housing with infinite design flexibility. Of the five Knitlock houses built in Victoria, three survive. The Salter House uses Knitlock system for walls (3’6’’ system) and roof (Knitlock tiles). In addition, the house is notable for the arrangement of intersecting room bays arranged around the central courtyard, the Japanese-inspired low pitched ‘tent roof’ ceilings, and detailing including chevron patterned casement windows.

In 1947 writer and architect Robin Boyd described the Salter House as “one of the finest house designs of the century.”¹ Almost 20 years later, in 1964, Queensland architect James Birrell wrote that the house “is more important to the development of Australian domestic architecture than any other house in the country.”² Today, it is protected at a local level in the Stonnington Heritage Overlay.

The Salter House is considered significant in relation to five of the eight Model Heritage Criteria. It has architectural, historic and scientific importance. In addition, it is one of the small number of Knitlock buildings constructed by the Griffins, two of Australia’s most well-known and highly regarded émigré architects and the designers of the winning competition entry for Canberra. Three mature gum trees on the property are identified as providing a contributory setting for the house, including a large lemon scented gum (Corymbia citriodora). Other interwar houses on the same street provide an extended context for the house.

“This project is a realisation of the Griffins’ forward-thinking vision of the home, which they saw as a place for reflection and engagement with the surrounding environment. The Former Salter House once again sits in a natural setting, inside and outside blending together in harmony as was their original intention.”
— JANE CAMERON ARCHITECT AND ARCHITECT HEWSON

The quality and significance of the house itself was the greatest opportunity of this project. More practically, the plan layout did not need changing, and new bathroom, kitchen and laundry facilities could be accommodated within the envelope of additions from the early 1960s, which housed wet areas and services under two skillion roofs. Potential was also found in later unsympathetic landscape additions – the inground pool was converted into a large water storage tank to supply the new garden. The owners, architects, builders, structural engineer and landscape architect all worked hard to ensure that this important and intriguing house was repaired and maintained to ensure its ongoing life.

“I like to think that Marion and Walter would be pleased to see the care we have taken to try and stay true to their intentions, particularly with respect to the garden. We love the simple lines of the house and its practical layout. It has lived up to the sense I got when I walked in the door that very first time: This is a place that can become a home.” — OWNER

Although well preserved compared to some other Knitlock houses, the house was well-worn when purchased by the current owners and various unsympathetic layers had been added over time throughout the house.

The project included many practical challenges, some of which were only revealed as the renovation proceeded. Mould, dampness and rotten timbers pointed to drainage problems. Casement windows had been painted shut and the Griffin-designed window mechanisms no longer worked. There were structural problems with one of the Knitlock walls and the house needed to be rewired. The Knitlock system made it tricky to address some of these problems. For example, electrical wiring ran inside the blocks, making rewiring almost impossible.

Some original construction methods had not withstood the test of time. For example, timber floor joists had been laid directly on the ground over the top of a layer of bitumen and filled with a mixture of pumice and soil in the rooms to the rear of the courtyard. This approach, adopted by Burley Griffin as a cost-saving measure, necessitated substantial subfloor work as part of the renovation.

The owners had not realised the full heritage value of the house and its significance to Australia’s architectural history when they first purchased the property, while the listing on the Heritage Overlay did not impose any restrictions as to what could be done on the interior. These factors could have led to substantial change and potential loss of heritage values. This did not happen. The owners took great care and learned much about the Griffins in the process. Their brief to the architects was to “allow the house to reveal itself through its unique structure, materiality and context.”

This was achieved by following the Burra Charter principle of doing only what is necessary and retaining as much as possible of the Griffins’ original intention.

Layers added over the years through previous renovations were removed room by room, with the project evolving and developing in relation to new discoveries. Much of the work involved repair and the subtle integration of technology, services and fittings without compromising the heritage fabric. The most extensive new interior changes occurred within the envelope of the 1960s additions. The bathrooms and laundry were updated and the layout reconfigured to include a new walk-in robe, while termite-ridden 1960s walls were rebuilt.

Colour and tone was carefully judged. Fireplaces and chimneys were reinstated. New joinery elements are designed to sit within the lines established by the horizontal timber fretwork and existing wall openings.

The change to the landscape and garden setting is substantial. Unsympathetic, overly formal hard landscape and non-native plants have been removed. The swimming pool has been covered over to create a 27,000 litre water reservoir. The new garden is a softer, much less rigid landscape of indigenous plants and informal spaces.