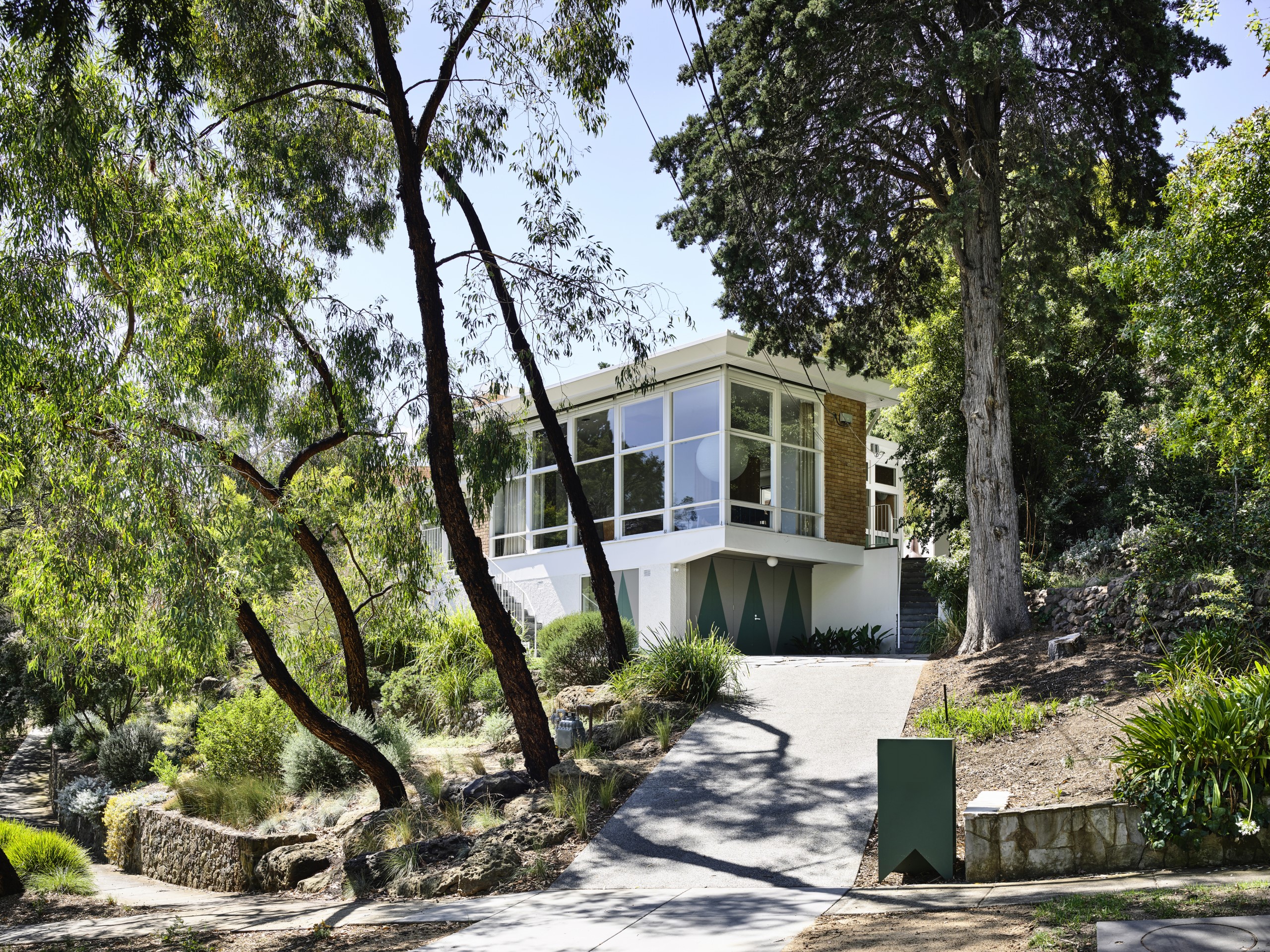 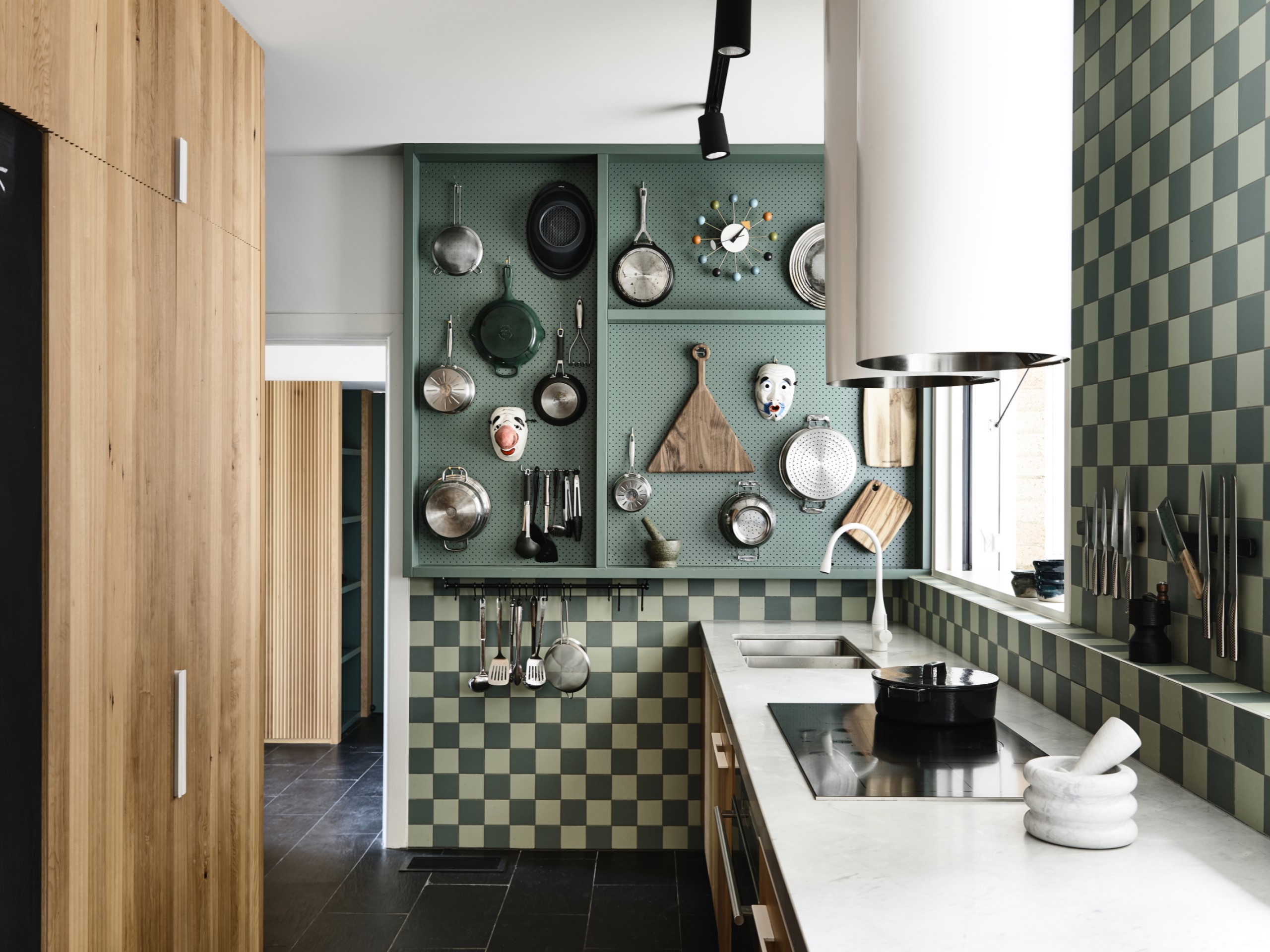 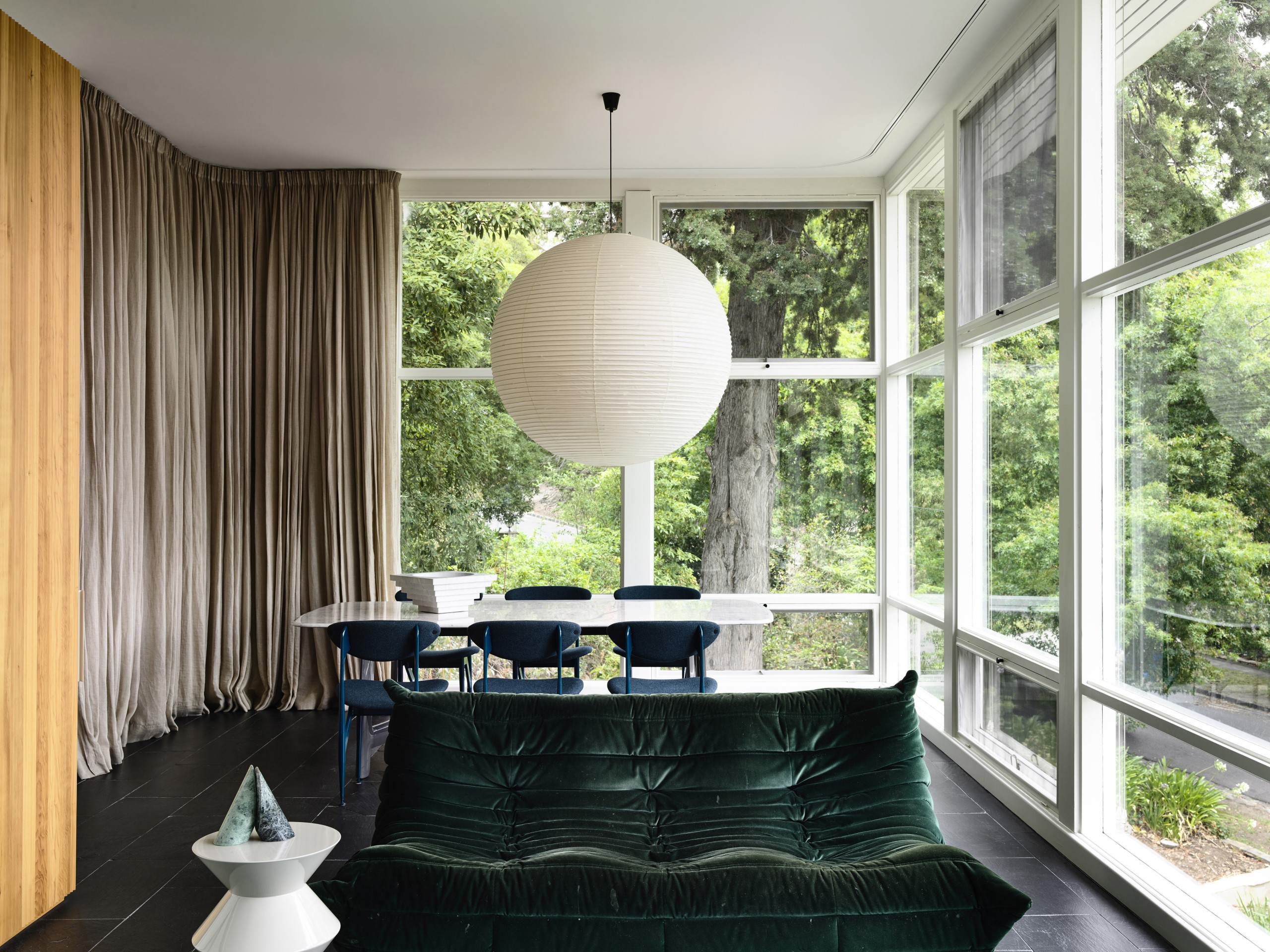 The Kagan House in Studley Park is a modest building that captures the optimism of the postwar period, which saw architects and homeowners explore what it meant to live in a ‘modern’ way. The renovation adapts the early 1950s house into a home for a family in the twenty-first century. Embracing the spirit of the original, it brings a joyful contemporary interpretation through colour, texture, materials and detailing.

Designed by émigré architect Anatol Kagan in 1951, the house is within the City of Boroondara’s Yarra Boulevard Heritage Overlay Precinct. This is notable for the distinctive collection of Modernist houses that respond to the leafy natural setting and hilly landscape.

Set in a garden on a small sloping site within the extended landscape of Studley Park, the house has both historic and aesthetic significance. One of a number of houses designed by Kagan in Kew, it contributes to the concentration of inventive, forward-looking architecture designed in a context of postwar restrictions. The house is regarded as part of a body of work that encompassed residential and government projects and was framed by a strong social commitment. It is also valued for its broader association with the cohort of émigré architects trained in Europe, who had a key influence on the development of Modernist architecture in Australia.

“In devising the palette and detail we were conscious of the need for restraint in expression to temper the luxury of contemporary amenity in a heritage interior which is defined by postwar austerity.” — KENNEDY NOLAN

Opportunities were found across scales. The precinct provided a productive context for the renovation, articulating the architectural and social aims and ambitions of the period, and emerging connections to landscape. There were opportunities to amplify this within the house by better connecting the interior spaces to the garden and the wider landscape setting.

The house and interior were mostly intact, which meant that the aesthetic values could be readily understood. There was potential to improve the internal flow through minor interventions in the heritage fabric. The presence of an undercroft, originally intended to accommodate a ‘future garage’, meant that additional living space could be found within the existing volume of the house. The existing decorative treatments, materials and detailing provided a rich resource for interpretation.

The current owners see themselves as custodians of this house. Having lived at the property for a number of years prior to the renovation, they were familiar with the house’s advantages and quirks, and sought to both respect and celebrate its heritage values in the new work.

The main challenge was how to better accommodate a multi-generational family of six within the two-bedroom house – which had a floor plan described by the architects as “both eccentric and strangely inefficient”. There was a need to find more living space, to improve connections between interior spaces and create a more cohesive relationship between house and garden. As in many properties from this period, the kitchen required updating for contemporary appliances and patterns of use, and there was a desire to bring in more light.

“Where possible, interior elements were retained and restored, such as the study shelving originally devised by Kagan, which is evocative of the specific programmatic requirements of the original commissioning client, the Bell family.” — KENNEDY NOLAN

The core aim was to preserve and restore the house and to draw on the heritage values to create a new future for the property. All new work refers to this Modernist heritage and extends it in a contemporary manner. The architects describe this approach as “an imagining of the trajectory of Modernist ideas without compromising the visual qualities of the original heritage object.” Particular care was taken to ensure that the new elements and finishes did not overwhelm this essentially modest house with an introduced aesthetic of ‘luxury’.

The project began with a process of selective editing. Various accretions that had accumulated over the years were removed and small alterations were made throughout the house to improve the relationship between interior spaces (a door removed, an opening widened). An additional bedroom and powder room were accommodated in the existing undercroft.

The interventions to better connect to the garden are conceived of as a development of “the first tentative steps” in the postwar period to explore the relationship between inside and out. Small changes within existing structural openings bring light into the kitchen and enhance the connection to the rear garden. The front terrace has been enlarged to become habitable rather than decorative, while maintaining the character of the original balcony. Overall, there has been minimal expansion of the footprint of the house, which helps to maintain the heritage values of both the house and the landscape setting.

Original interior elements and details have been restored wherever possible, and are regarded for the memories they contain – for example the study shelving designed by Kagan is valued partly for its connection to the specific requirements of the original client. New colours, materials and detailing draw playfully on the architectural language established in the original house, without replicating it, and some also reference the owners’ interest in the wider context of postwar domestic architecture.