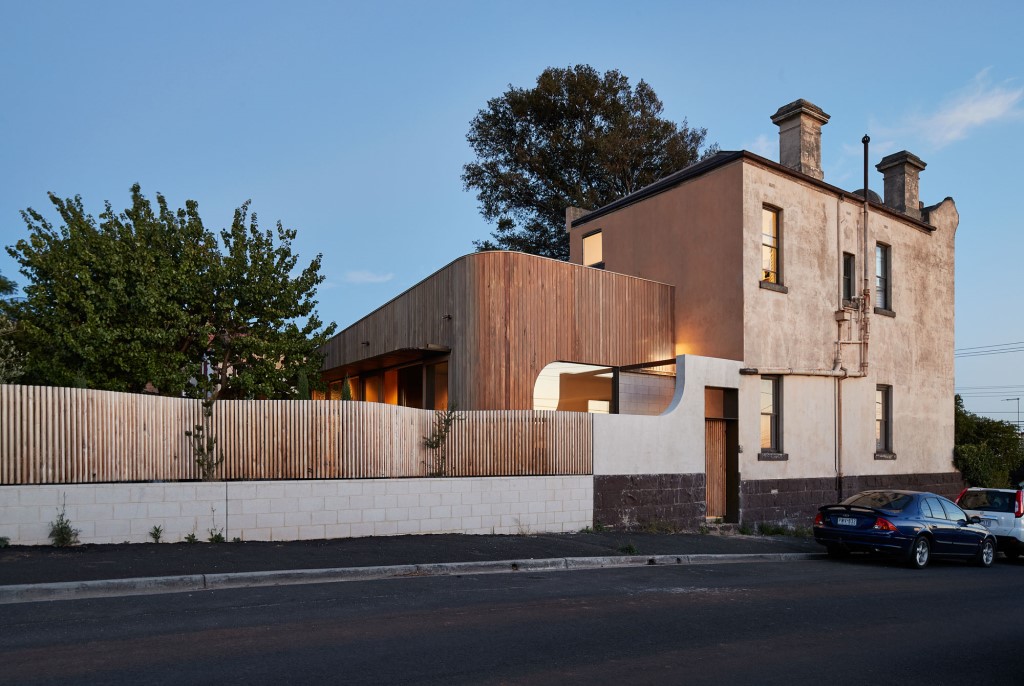 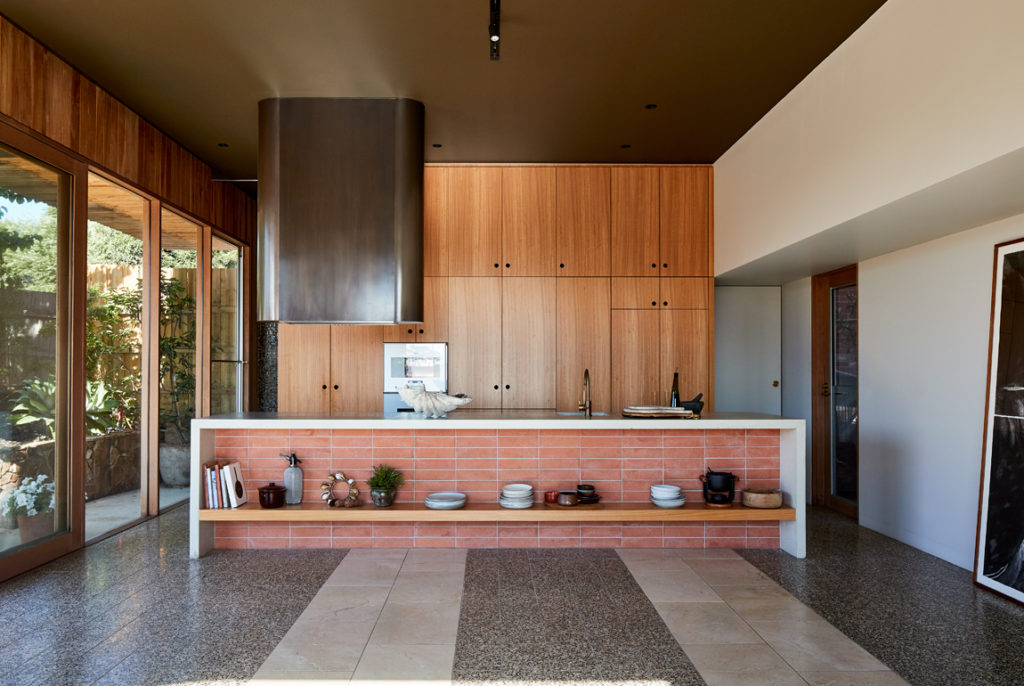 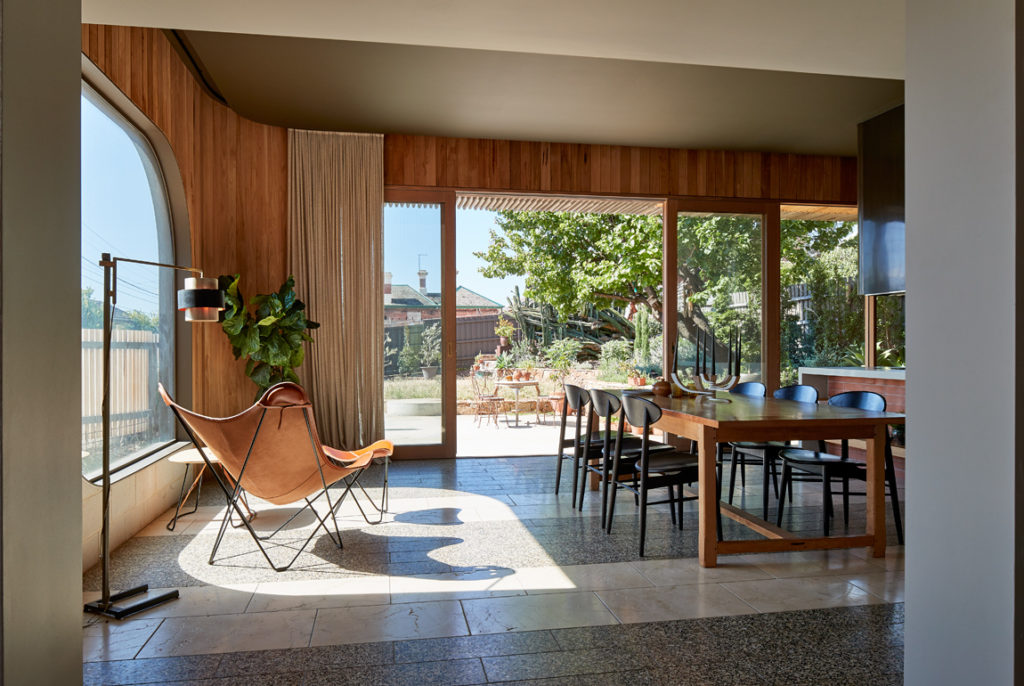 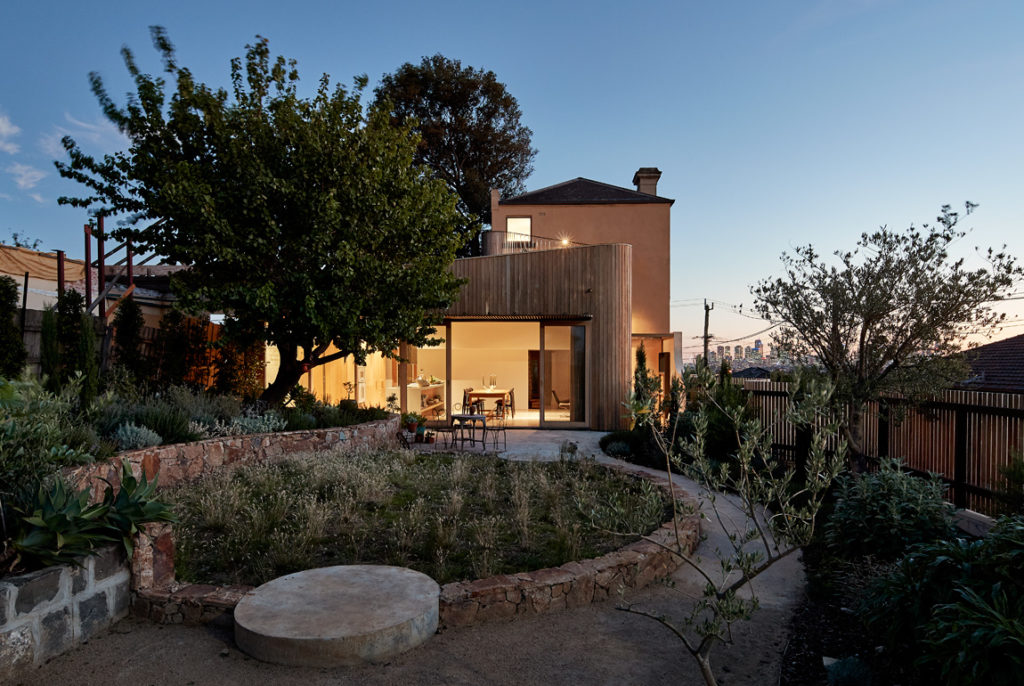 The Bustle House takes the item of Victorian women’s clothing as a metaphor for a striking yet sympathetic addition to this late-nineteenth-century house in Northcote. The approach to the design and materials pursues themes of memory, beauty and aging, while the long edge of the prominent corner site creates a generous relationship to the street and neighbourhood.

Built in 1885 and located on the crest of Rucker’s Hill in Northcote, this house is in a Darebin City Council Heritage Overlay precinct. The area is historically significant for its demonstration of the development of the middle-class suburb during the late Victorian and Post-Federation recovery eras. It is aesthetically significant for the stylistic diversity of the precinct and the range of types of residences – from imposing middle-class Victorian villas to smaller workers’ cottages. This house dates from the period of the first township land sales in the 1880s.

The site and history of the property presented a suite of opportunities – both practical and conceptual. Located on an elevated corner block, the double-storey house is prominent in the streetscape and offers views across Melbourne. The long side of the property provided the chance to develop a considered street edge that engages with the neighbourhood while preserving the tall Victorian front elevation with its more aloof, slightly ramshackle air.

Perched on top of Rucker’s Hill, the Bustle House retains the prominence of the late-nineteenth-century house, while creating a striking addition that engages with the elongated corner site.

“We celebrate the original beauty of the house and allow it to age gracefully by acknowledging its weathered nature as a thing of beauty and respect.” — FMD ARCHITECTS

The grasslands that covered the area prior to colonisation were important references for the landscape design. The plan of the main house was functional and did not require adjustment.

Only two families have lived in the house since its construction in 1885 – that of the original owner and the current owners. The architect describes both families as “led by elegant and distinguished ladies”, while the current owner refers to the house itself as an “old Victorian lady”, and considers herself a custodian of the property. These women and this characterisation of the house provided the conceptual drive for the design of the addition.

The original kitchen and amenities were housed in lean-tos at the back of the main house. These separated the large north-facing backyard from the living spaces and blocked the northern light. The challenge was to create lighter living spaces with a better connection to the garden while respecting and maintaining the heritage house.

The addition to the house was conceived of as a ‘bustle’ worn by the aging yet beautiful house. This playful metaphor has driven the design approach across scales – from the overall form and shape of the addition to detailing and material selection.

Seen from the long street elevation, a new lightweight timber structure projects from the back of the tall solid form of the main house – a Victorian ‘lady’ in profile. The bustle metaphor continues into the landscape with the curving fence to the street imagined as a ruffled train, and the garden planting envisaged as embroidery. The ‘ruffled’ fence creates a welcoming neighbourly edge, with layered views between garden and street and an invitation to passers-by to rest within the timber curves.

In heritage terms, the materials and form of the additions are clearly distinguished from the heritage fabric and don’t compete with the original home. The new work tapers away from the nineteenth-century house, allowing the Victorian form to be clearly seen in the round, while the sightlines from street are not interrupted.

The addition accommodates a new kitchen, dining area, bathroom and laundry on the site of earlier lean-tos. The heritage house has been carefully preserved, with the plan and room layouts maintained and only one new opening connecting the house to the new areas.

Within the addition, materials and treatments were chosen that would change visually over time in response to processes of weathering and aging. The concrete benchtop, terracotta tiles and timber lining will all develop a patina with use. This means that the addition will also index the passage of time, akin to the original house.

In addition to the late-nineteenth-century history recognised through the Heritage Overlay, the project responds to the earlier histories of the site.

The area was covered in fertile grasslands, described by the landscape architect Jo Ferguson as “a kind of food cupboard for the Indigenous nations before us”¹. The house is also close to where John Batman’s 1835 ill-fated ‘treaty’ may have been signed for the ‘purchase’ of Melbourne from the people of the Kulin nation. The landscape architect and architect have sought to acknowledge this and to show respect. As Ferguson explains, “It feels important, considering the history of this area, to display gratitude and somehow show that we appreciate what was here before us.”²

The landscape design draws together multiple memories and histories. The centre of the garden is planted with indigenous species of grasses and bushes, as a memory of the grasslands that were utilised prior to colonisation. The owners’ personal histories are also recalled – pencil pines, olives, lavender and thyme recollect a Greek childhood, while concrete pavers, winding paths and a side gate echo the hot summer backyards of the Australian suburbs. An apricot tree and cactus remain from the previous garden.