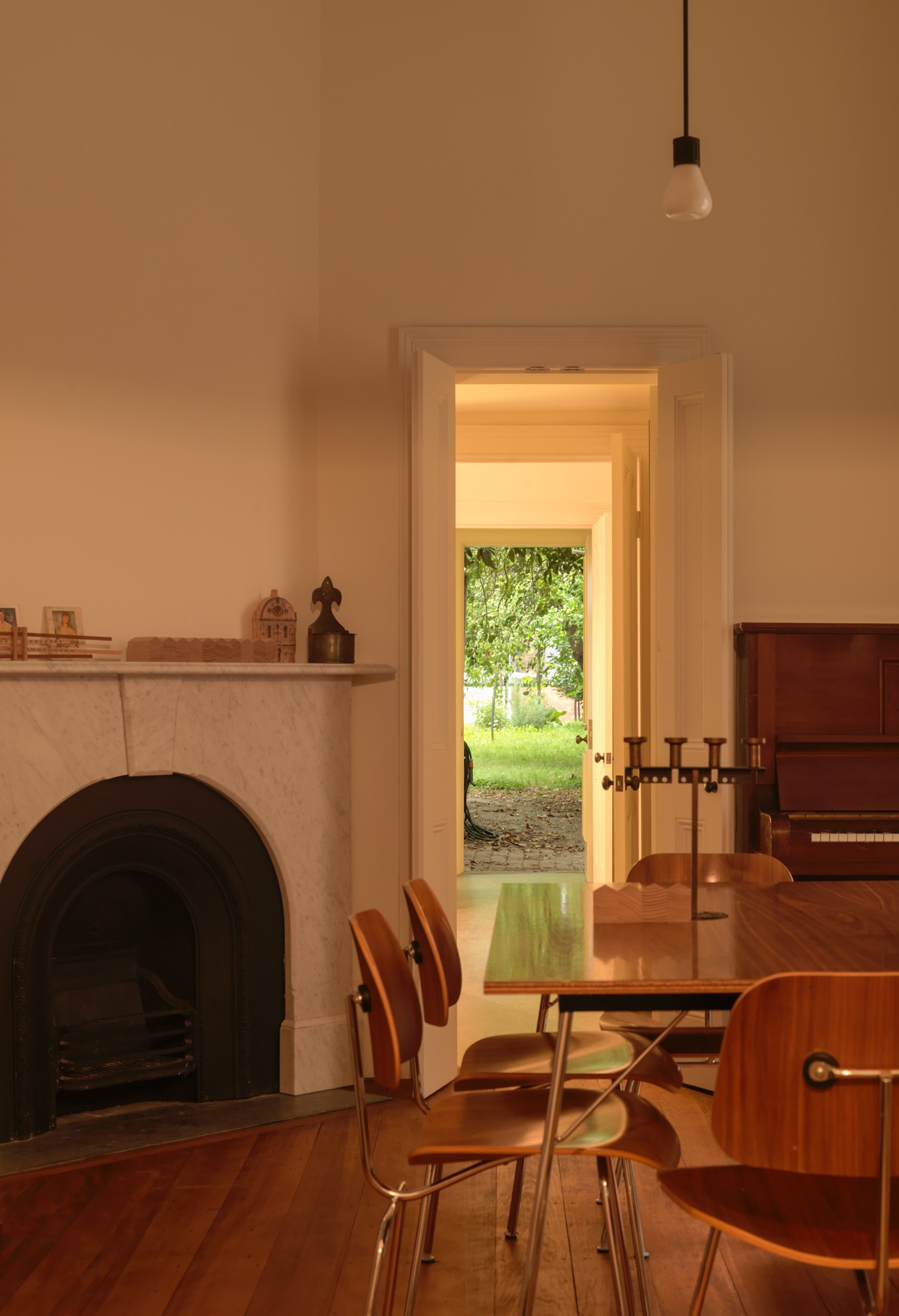 The Arnold Street House is a skillful, striking combination of serious and faithful restoration with elegant new elements. The house has been lovingly revived though painstaking research, with the overall ambition of maintaining the spirit of the house.

Built in 1888, this substantially intact ‘spare Italianate’ two-story house ‘of unusual proportions’ sits within a largely intact late-Victorian streetscape in Princes Hill, an inner suburb of Melbourne. The area is protected by a Heritage Overlay in the Yarra Planning Scheme, which recognises its strong and well-defined Victorian and Edwardian residential character, the aesthetic beauty of the streetscape and the distinctive urban landscape character. The house is one of many significant buildings in the suburb. The building has had few changes and, as such, provides a good understanding of an ‘ordinary’ yet substantial Victorian home.

The Arnold Street House is valued by its architect/owner as a good example of an ‘ordinary’ Victorian home – “The building offers … the opportunity to intervene quietly and sensitively, working with, rather than against, the existing fabric.”

“This original building was sought, and then, when found, tightly held, driving the faithful restoration of Arnold Street to its 1888 Victorian state. Layers were peeled back, each action unveiling the hands that had once been there, a trace of a former builder, a herringbone strut, a note on the inside of a door frame.”
— ROBERT SIMEONI, ARCHITECT

The house was structurally sound and largely intact. Unusually for a house of this period and location, the floor plan had not been altered and all rooms had retained their original function. The building contained many clues that could be used to inform the restoration – for example, weathered external mouldings were sufficiently intact to determine their original profile, one internal fireplace surround remained on which others could be modelled, while paint and mortar remained was tested and matched. A neighbouring house built at the same time still had some original features that were no longer evident at this property – this provided an opportunity to reinstate these elements as part of the restoration. The owner/architect saw the great potential to work with the original house.

The project was undertaken with a great deal of patience and care. The approach to restoration evolved over time. Parts of the original building fabric were uncovered, examined and tested throughout the course of the project, with each new find providing the clues to inform and guide subsequent work. This was a slow and uncertain process, but one that was ultimately highly rewarding.

The approach to the house has three main layers, all of which are framed by the Burra Charter tenet “do as much as is necessary and as little as possible”. The first significant decision was to keep the original facade and the floor plan and the function of all rooms. Robert Simeoni, the architect and owner, comments that “rooms that were once bedrooms remained bedrooms, the kitchen remained the kitchen”. The biggest change was to make the exterior lean-to toilet accessible from inside. Notably, the changes did not open the rear of the house to the garden or enlarge windows or doors.

The second was to undertake careful and rigorous restoration through a process of constant testing and research. Simeoni explains: “Render samples were made, applied, judged, and repeated until the colour was as close to the existing as possible while maintaining an authentic lime mortar mix to ensure compatibility with the existing render. Answers to how to proceed with the repair or replacement of a certain element of the house derived from looking further into the house, the clues that live within; it all came from within.” The restoration has retained many traces of the past throughout the house – paint traces remain, the old toilet brick vent is maintained and celebrated with a highly contemporary new steel window frame.

The final component of the project was a series of elegant and finely designed insertions: “a walk-around robe sits formidably in a room of its own, layering its shadows on the already shadowed walls”. The most substantial change is in the new kitchen, which has been fully refitted in a contemporary manner, while aiming to maintain the spirit of the original. Other interventions include frames, shutters and curtains added to windows and doors, creating layered relationships between the interior and exterior. New internal timber shutters meant that thin original glass could be retained while also improving the thermal performance. A new sliding frame on the rear door uses weights for a double-hung window found in the garage.

The outcome is a beautiful, thoughtful home, which retains the spirit of the old while generously accommodating current and future lives.