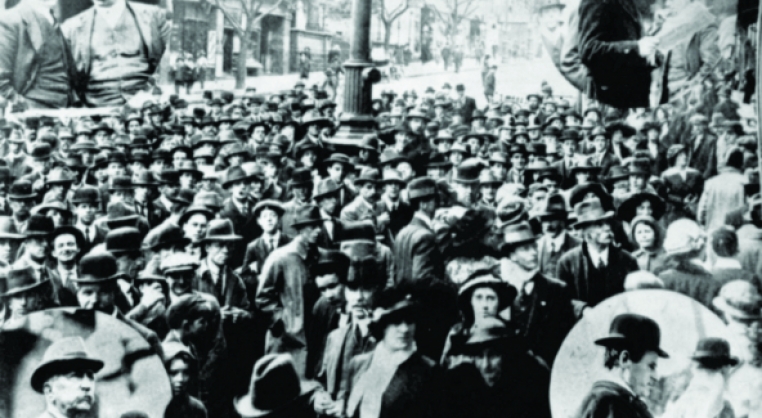 Crowd outside the Argus office at the outbreak of war AWM H11612 Credit: Australian War Memorial

Melbourne at War – Stop 4a

Stop 4a is Collins Street

Melbourne’s major newspapers at the time had offices in Collins Street – The Age at No 239 -241 and The Argus at No 76. It was also the venue for large farewell parades as soldiers marched through the streets heading for Port Melbourne and the waiting troop ships.

Collins Street is full of reminders of Melbourne during World War One.

The city’s two major newspapers at the time had their main offices in Collins Street – The Age at No 239 -241 and The Argus at No 76.

Large crowds would congregate outside these buildings in search of news of major events from the war front. Enlistment rallies were also held in front of these offices, in keeping with the pro-war and pro-conscription sentiments expressed in their publications.

Collins Street was also the venue of large farewell parades as soldiers heading to war marched through the streets heading for Port Melbourne and the waiting troop ships.

“A seething crowd broke through the cordon at the [newspaper office] door and rushed the counter where the papers were being sold … In an incredibly short time … everyone in the street seemed to have heard the news of the declaration of war. Some were enthusiastic, some evidently gratified; some seemed overweighted by the import of the news, some were openly pessimistic, but the general feeling was one of relief that the terrible waiting and uncertainty of the last few days was over, and that, whatever the issue might be, Great Britain had made her voice known in the quarrel of the nations.”