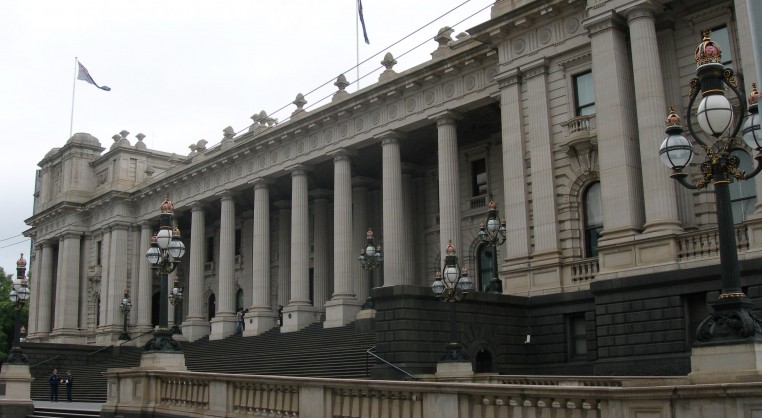 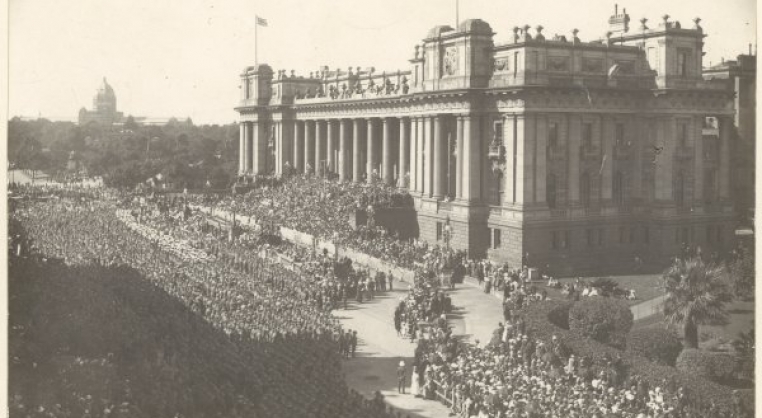 From 1901 to 1927 Melbourne’s Parliament House was the home of the Commonwealth Parliament. Melbourne was in effect the capital of Australia, and it was here that many of the major events of the early Federal period took place.

Next stop is Melbourne Town Hall via Collins Street.

“Should anything happen, after everything has been done that honour will permit, Australians will stand beside our own to help and defend her to our last man and our last shilling.”
So declared Opposition Leader and future Prime Minister, Andrew Fisher.

From 1901 to 1927 Melbourne’s Parliament House was the home of the Commonwealth Parliament. Melbourne was in effect the capital of Australia, and it was here that many of the major events of the early Federal period took place.

And it was here on the 5th August 1914 where the Australian Government declared war on Germany, along with the commitment to provide an initial expeditionary force of 20,000 men to Britain. The war was declared during an election campaign, and so the new parliament had to move quickly.
“You have been called together at the earliest moment after the return of the writs to deal with matters of great national importance, many of them arising out of the calamitous war in which the Empire has been compelled to engage. It is a matter for lasting satisfaction that every part of the Empire has responded with splendid devotion to the call of duty in the cause of civilization and justice, and of those high ideals for which the Empire stands.”

It was also here at Parliament House that major and exceptional legislation was passed. It was called the War Precautions Act of 1914, which curtailed freedom of speech and perceived anti-war activities. The Constitution was in effect suspended and the Commonwealth Government was able to make laws about anything that affected the war effort.

Trading with the German controlled companies was stopped, farmers wheat and wool crops were compulsorily bought, prices of many goods were fixed, Australian residents from German or Austrian descent were interned or locked up without trial, and letters and publications were censored.

Furthermore, a person could be declared guilty of any action that undermined the war effort. This included destroying official posters for conscription referendums, singing anti-conscription songs, or printing and handing out leaflets about anti-conscription protests.
“Australia is not under martial law, and we maintain that even Parliament itself would never have passed the War Precautions Act if it had believed that it was giving the military authorities the power to arrest and keep in prison any British subject without the right to be heard in self defence. … We are supposed to be fighting Germany because we detest her methods of oppression. Then let us prove that we do detest them, instead of passing such diabolical measures as are embodies in the War Precautions Act.”

Parliament House was also the venue for one of the county’s most divisive political battles.

Prime Minister Billy Hughes had witnessed firsthand Australia’s troops in the trenches of France and in the hospitals of England, and he passionately believed in the need for urgent reinforcements.

By 1916 the Australian nation was divided over the question of military service overseas. Regular and lengthy death notices dominated the newspapers and the community began to tire of a war that seemed endless.

Hughes’ proposal to introduce conscription was defeated after a bitter and divisive political campaign. Consequently he was expelled from the Labor Party, and he and many of his colleagues formed a new Nationalist Party government.
“Let those who think with me, follow me!”
“I did not leave the Labor party. The party left me”.

This was a time of great uncertainty and turmoil.

During August 1917 Parliament House was stormed by protesters demanding fair paid work.
“Look at the cost of living and ask yourself if these girls can live upon their wages, if they cannot, what in God’s name are they to live on. We have done everything we can think of to persuade the government to take action and protect the people against the profiteers, everything we can think of, we have had deputations and pointed out to the government that they must improve the condition of affairs in regard to people’s food, but there is absolutely no notice taken at all, they were determined to protect the profiteers, and not the people they do not care a bit about if only the profiteers make money.”

But at the end of the war, it was in front of the Parliament House that significant public events and celebrations such as Armistice Day celebrations occurred.

When news that Germany had signed the armistice arrived, it spread like wildfire throughout Melbourne. Huge cheering crowds poured into the city and thronged the streets and a public holiday was declared.

And over the following months, parades of returned service personnel marched past Parliament House in an atmosphere of alternating revelry and solemnity.

Now make your way to the Melbourne Town Hall via Collins Street.