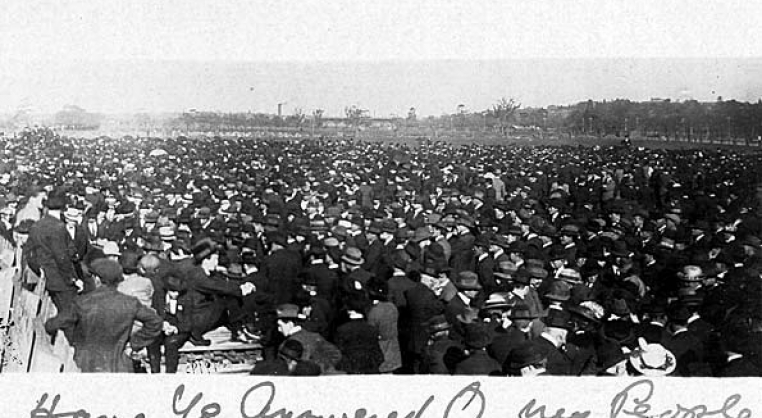 This is Speakers Corner, or Yarra Bank as it was called in those days. It was a major venue for public speaking from the late 1880s, and on 4th October 1916  it was the venue of the country’s largest anti-conscription rally.

The next stop is Parliament House on Spring Street

It’s the 4th October 1916, and WW1 has been taking its bloody toll for 2 years on Australia’s youth. Australia is in turmoil and here, at this now quiet and peaceful place, was a crowd of some 100,000 people.

This is Speakers Corner, or Yarra Bank as it was called in those days. It was a major venue for public speaking from the late 1880s, and on this day it was the venue of the country’s largest anti-conscription rally.

“The demonstration … was a gigantic success; in fact … we expected a procession, but we never expected to see the crowd of women who marched. The procession was over a mile long, extending from the Guild Hall right to the road that led to the Yarra Bank.”

Prime Minister Billy Hughes had recently returned to Australia after being away for 8 months visiting London and the battlefields in France. The war was going badly and more men were needed to fill the ranks of the dead and wounded. Conscription seemed to be the only answer and soon became a major issue with a referendum set for 28th October 1916.

Prime Minister Billy Hughes lobbied for his cause …

“Don’t leave the boys in the trenches. Don’t see them butchered. Don’t leave them below strength or you will cover Australia with shame.”
“Women of Australia – To vote NO would be to abandon those gallant Australian Troops who are fighting so heroically for you.”

A YES vote was championed by influential groups such as the Australian Women’s National League. In addition, major newspapers ran headlines warning Australians that the Kaiser wanted you to vote NO but the ANZACS wanted you to vote YES.
“As a mother of an only child – a son – may I say that we women, who demand to be heard, will tolerate no such cry as Peace! Peace! when there is no peace … There is only one temperature of the British race, and that is white heat. With those who disgrace their sacred trust of motherhood we have nothing in common … We women pass on the human ammunition of ‘only sons’ to fill the gaps … if the men fail, the women won’t…”
“Australians ought to go down on their marrow bones every day of their lives and say, ‘Thank God men go to war – the war doesn’t come to us’.”

In response and against the odds, the anti-conscription movement launched a campaign with public meetings in local streets and rallies at venues such as Storey Hall in Swanston Street.

The anti-conscription movement was supported by the Victorian Trades Hall, most Labor unions, the Catholic Archbishop of Melbourne Daniel Mannix, a host of anti-war and peace organisations, and notably a young John Curtin, later to become the Prime Minister of Australia during WW2. John Curtin was at the time a member of the Victorian Socialist Party, and was arrested for his efforts.

The gathering on the 4th of October was the largest of the anti-conscription rallies, and was organised by the Women’s Peace Army. They marched through the city streets, bringing Melbourne to a standstill, and gathered here to hear a host of women speak against conscription. These included the determined and outspoken women’s suffrage activists Vida Goldstein and Adela Pankhurst.
“When years of mad slaughter have passed by, and we begin to feel the shortage of food and necessities which in our frenzy of destruction we have destroyed, and we realize that the hands to create new stores have been swept away in millions, while thousands of maimed, brutalised, maddened men will return to burden us, then we shall remember the solemn words: “Put up again thy sword into his place; for all they that take the sword shall perish with the sword,” and learn that by our weapons we slay, not others only, but ourselves as well.”

The Blood Vote
Why is your face so white, Mother?
Why do you choke for breath”
O I have dreamt in the night, my son
That I doomed a man to death.

Why do you hide your hand, Mother?
And crouch above it in dread?
It beareth a dreadful brand my son
With the dead mans blood ‘tis red

I hear his widow cry in the night
I hear his children weep
And always within my sight, O God
The dead man’s blood doth leap

They gave me the ballot paper
The grim death warrant of doom
And I smugly sentenced the man to death
In that dreadful little room.

I put it inside the Box of Blood
Nor thought of the man I’d slain
Till at midnight came the whelming flood
God’s word – and the brand of Cain.

O little son! O my little son!
Pray God for your Mother’s Soul
That the scarlet stain may be white again
In God’s great Judgement Roll

The conscription campaign of 1916 bitterly divided the nation and, much to the ire of Prime Minster Billy Hughes, resulted in a narrow NO vote. Another referendum was held in 1917, again with a NO result.

The rising tide of anti-war and anti-conscription sentiments led to the Australian Government bringing in many draconian measures. Singing anti-war songs was banned under the War Protections Act of 1915, and distributing anti-war leaflets was deemed illegal with penalties of between two and four months gaol.

The idea of conscription was abandoned for the rest of the First World War. Ironically, however, once an anti-conscription activist, Prime Minister John Curtin, introduced a limited form of conscription during the second world war.

The next stop is Parliament House on Spring Street